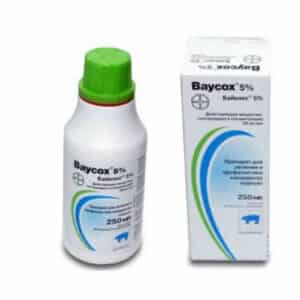 Toltrazuril, which is part of the drug, has a wide spectrum of anti-coccidal action, is effective against Isospora suis, Eimeria arloingi, Eimeria scabra, Eimeria guevarai, Eimeria bovis, Eimeria zuernii, Eimeria alabamensis and other types of coccidia that parasitize pigs and cattle at the stages of their intracellular development. By blocking respiratory enzymes, toltrazuril has a damaging effect on the mitochondria and the processes of nuclear division of coccidia, disrupting the formation of macrogammetocytes. After oral administration of Baicox, 5% toltrazuril is slowly absorbed in the gastrointestinal tract and has a coccidivating effect on the mucous membrane and submucosal layer. It is partially metabolized in the body by sulfoxidation and hydroxylation to form sulfide and sulfone derivatives. Toltrazuril is excreted from the body mainly in unchanged form (70%), but also as metabolites in the feces and partially in the urine.
Add to wishlist
Add to cart
Quick view
-8%EmodepsideToltrazurilAntiparasiticAntiprotozoalCoccidiosis 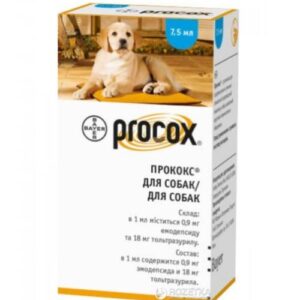 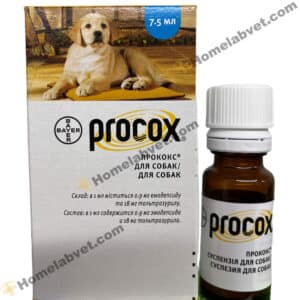 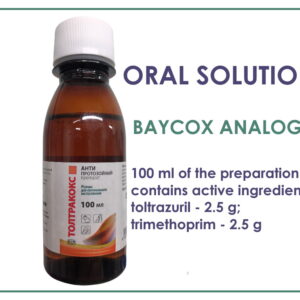 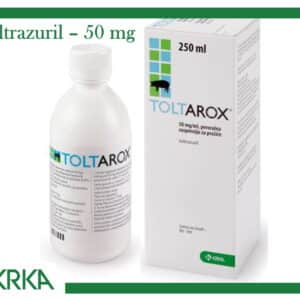 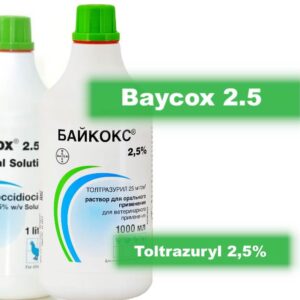 Toltrazuril 2.5% has a pronounced anticoccidial effect. The active component is effective against the simplest microorganisms,all kinds of coccidia,which parasitize in the bodyof Chickens, Geese, Turkeys, Chicken Broilers, Other poultry, Rabbits. Toltrazuril, slowly absorbing into the mucous membranes of chickens,other poultry species destroy bacteria at all stages of their development,including strains that are insensitive to the action of other anti-coccidia drugs. The active ingredient of the drug blocks the respiratory components of clostridium,disrupts the formation of macrohammetocytes,which leads to immediate death of parasitic flora. After oral administration, the drug has an immediate effect. Well tolerated by the body of chickens, chickens, turkeys, rabbits. Medicine Baikoks for birds does not reduce the natural resistance of the body,does not reduce the immunity of chickens, geese to the agents of coccidosis.
Add to wishlist
Select options
Quick view
-10%NewToltrazurilAntiparasiticAntiprotozoalCoccidiosis 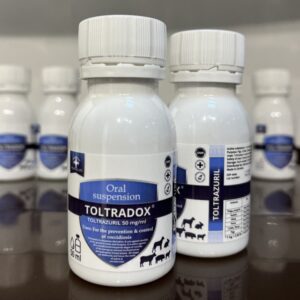 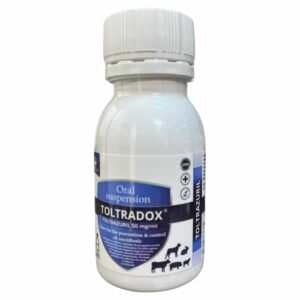 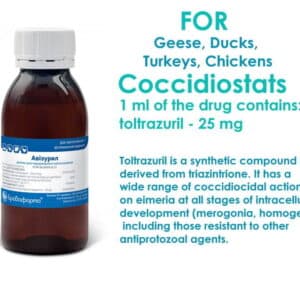 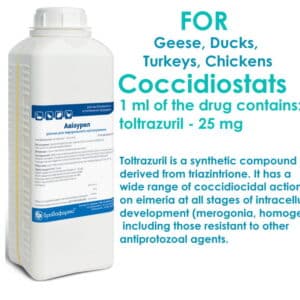 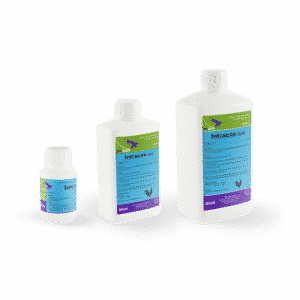 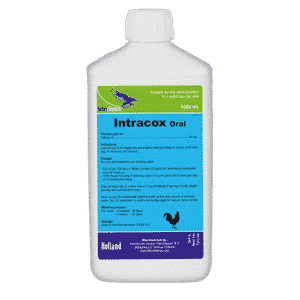 Transparent solution. Composition In 1 liter of solution: Toltrazuril - 25 g. Filler - up to 1 liter. Description In appearance, the preparation is a clear solution. Pharmacological properties The active ingredient of the drug is toltrazuril, which is a triazintrione derivative. Toltrazuril causes changes in the complex mechanism of development of coccidia, affects the endoplasmic reticular tissue. The Golgi complex causes pathologies in the perinuclear space of the cell, causes disturbances in the process of nuclear division. It also leads to a reduction in the parasite's respiratory chain enzymes. The drug has a wide range of anti-coccidial and antiprotozoal activity. Toltrazuril is very effective against Eimeria species - E.acervulina, E.burnetti, E.maxima, E.mitis, E.necatrix and E.tenella in broilers and replacement poultry and E.adenoides, E.meleagridis, E.meleagrimitis in turkeys ... Indications for use Prevention and treatment of poultry eimeriosis (broilers, replacement poultry, turkeys) with invasive diseases caused by: E. acervulina, E. brunetti, E. maxima, E. necatrix, E. tenella, E. Mitis; E. adenoids, E. meleagridis, E. meleagrimitis.
Add to wishlist
Add to cart
Quick view
-9%NewToltrazurilAntiparasiticAntiprotozoalCoccidiosis 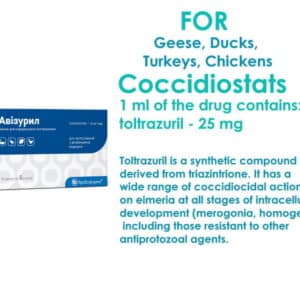 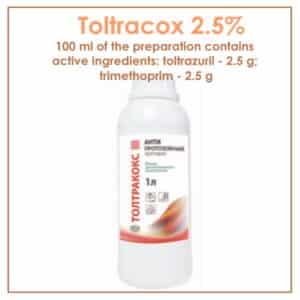 Toltrazuril is a veterinary drug coccidiostatic. Toltrazuril (TZR), 1-methyl-3- [3-methyl] -4 [4- (trifluoromethylsulfanyl) phenoxy] phenyl] -1, 3,5-triazinane-2,4,6-trione is a symmetric triazinetrione compound. It has a coccidicidal effect at all intracellular stages of development, including schizogony and gametogony (Mehlhorn et al., 1984; Haberkorn and Stoltefuss, 1987). It is known to be effective against all types of coccidia in most animal species, such as chickens (Mehlhorn et al., 1984), ducks (Chauve et al., 1994), dogs (Daugschies et al., 2000), mice (Haberkorn et al., al., 1983), pigeons (Van Reeth and Vercruysse, 1993), piglets (Mundt et al., 2007) and rabbits (Peeters and Geeroms, 1986). TZR undergoes extensive metabolism to toltrazuril sulfate (TZR-SO) and then to TZR-SO2, which appears to have anti-coccidial activity (Benoit et al., 1993; Lang et al., 1996; Bach et al., 2003; Mundt et al., 2007). In general, triazines produce the same types of metabolites in most species, but the ratios of metabolites showed a number of differences (Ferr and Kennedy, 2000; McKay, 2006; Kim et al., 2010; Lim et al., 2010). In addition, TZR is almost exclusively metabolized to TZR-SO2, also known as ponazuril (PZR), which has been recognized as a metabolite marker in a number of tissues. Although TZR is commonly used to prevent and treat coccidosis in broilers, the pharmacokinetic and metabolic profiles of TZR in broilers have received minimal research. In general, coccidiostatics are used to combat coccidiosis, a disease caused by coccidia, a single-celled parasite of the genus Eimeria. They are mainly used in nutritional supplements for fattening chickens, for treatment and prevention on farms, where diseases are more common due to high humidity, high temperatures or dirt. Toltrazuril is a synthetic derivative of triazinetrione that is used as an oral suspension in drinking water for the treatment of coccidiosis in chickens, turkeys, pigs and cattle. The recommended dose and duration of treatment for chickens and turkeys is 7 mg / kg body weight per day for two consecutive days. Pharmacological studies have shown that toltrazuril is well absorbed in the gastrointestinal tract and is rapidly metabolized to toltrazuril sulfoxide and toltrazuril sulfone, also known as ponazuril. Toltrazuril sulfone is slowly cleared from the tissues of chickens, turkeys and calves and is considered a marker for toltrazuril residues. For example, the residues of toltrazuril sulfone in calves after administration of a single oral dose of toltrazuril 15 mg / kg body weight can be determined 42 days after administration with concentrations (μg / kg): 848 in liver, 393 in kidney, 99 in muscle and 260 in adipose tissue. … In addition, toltrazuryl sulfone residues can still be detected in liver samples 70 days after treatment. Toxicological studies of toltrazuril in rats have shown that higher doses cause significant weight loss, changes in blood counts and abnormal liver function, as well as teratogenic and embryotoxic effects such as long bone dysplasia and a significant decrease in fetal numbers.